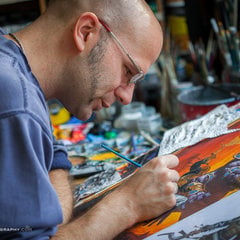 He is well known for Magic the Gathering art, but also for his personal project: "Norse Mythology art book", which was succesfully funded in 2017, in cooperation with Jon Schindehette/Art Order.

Some of the clients/projects:

Illustrations are made in traditional media.